Welcome to the first in a series of blog posts by the Combined Military Services Museum! I’m Matthew, an archivist and research volunteer here at the museum. As an historian by passion and now by profession, my interest in British history began as a History Teacher in Singapore from 2015 to 2019. My interests in history led me to completing an MA in History at the University of Essex in Colchester at the beginning of this year. To answer any doubts at this point, yes, I was born in Singapore. Singapore being a previous British colony that was granted independence in 1965, has steeped its historical narrative in its relationship with the East India Company and the British Colonial Government since 1819. Having been surrounded by British culture and practices from birth, I found it appropriate to further explore my passion for British history by moving to the United Kingdom.

Colonial Troops: Spoiling for a fight?  An Introduction

With October being Black History Month, the Combined Military Services Museum is honoured to commemorate the service and sacrifice of troops of ethnic minorities and colonial troops who were involved in war.

The series of blog posts, themed “Colonial Troops: Spoiling for a fight?” will be highlighting the contributions of ethnic colonial troops in the First and Second World Wars, but from the perspective portrayed in British war-time propaganda and collections found in the museum.

The Glorious loyalty of India?

From the 28th of June 1858, the formation of the Crown Colony of India under the jurisdiction of Queen Victoria, marked the formal beginning of long-standing cooperation between British military forces and Indian troops, fighting alongside one another in a myriad of colonial military campaigns within and around India. From the North-Western frontier border skirmishes between India and present-day Pakistan in the early 1860s, right up to the First World War, “The War Budget” magazines in the museum collection provide an insight into the attitude of British media from 1914 towards Indian troops. 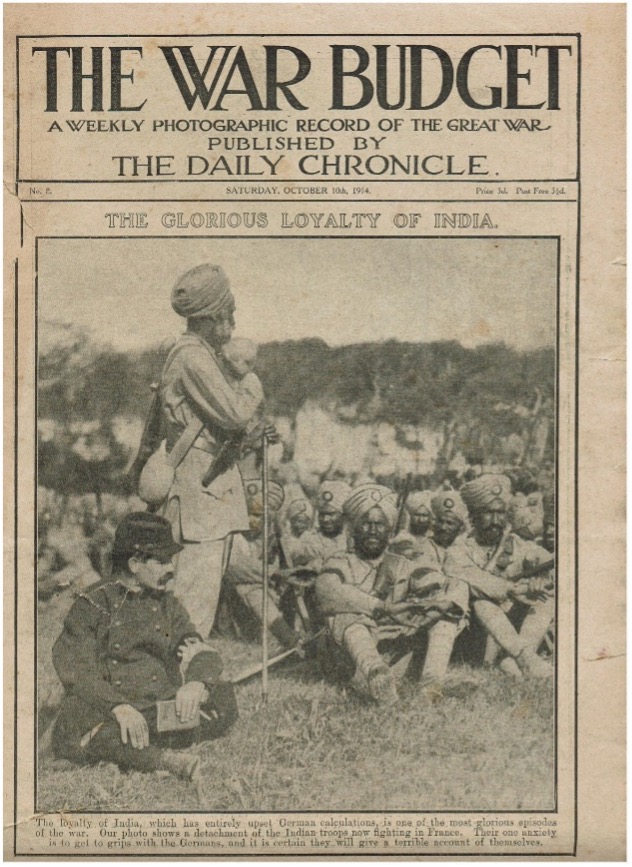 In preparation for the first British offensive against the Germans in 1915 during World War 1, Britain’s forces in Europe were supported by Indian troops also known as ‘Sepoys’, who sailed over directly from the British Colony of India, known popularly at the time as the British ‘Raj’. By March of 1915, half of the British forces in Northern France were comprised of Indian troops. 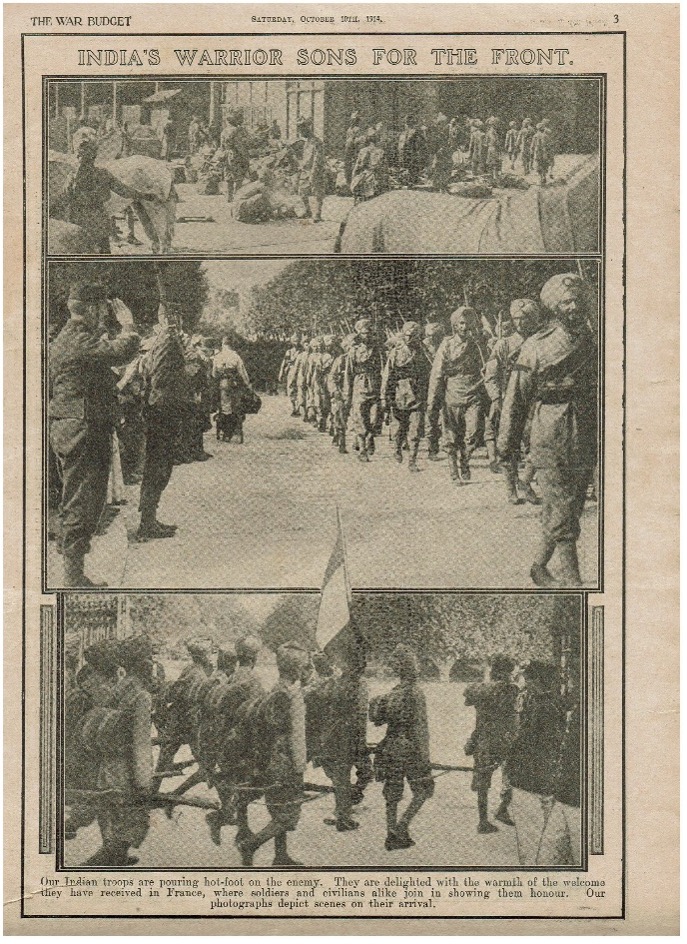 The captions published in the magazine regarding the attitude of Indian troops, as being “delighted with the warmth of the welcome they have received in France” hardly captured the reality of the situation.

Indian troops, while familiar with the climate and surroundings in India, were alien to the European environment. On top of their efforts to comprehend their role in the fight against the Germans, Indian troops arrived at the docks of Marseille in France in an ill-equipped manner, wearing tropical Indian military uniform. In October of 1914, Indian troops would have begun to experience the bitter cold of their first European winter.

To claim that colonial troops were “Eager to meet the foe” (see image 3) would be equivalent to saying that Indian troops had the same motivation as compared to British troops to protect Europe. It is understandable that such a caption would be published in this magazine as it could be to build the confidence of the British public with regard to colonial troops. Historians like myself however would argue that the motivation of the Indian troops would have stemmed from the pressure they would have received from the British Colonial Government to cooperate with British military efforts in Europe at the time.

Nevertheless, their participation in World War I alongside British troops is nothing short of admirable. To have sailed to Europe for the first time, and be given quick tactical lessons on trench warfare, while learning to use the British standard issue Small Magazine Lee Enfield Mk I rifle is a feat worth commemorating.

Some of these valiant efforts were first witnessed in March of 1915 at Neuve Chapelle in France, where Indian colonial troops battled fiercely against German troops and had their first taste of trench warfare. The specifics of this campaign will be explored in next week’s blog post.  We hope to see you then. 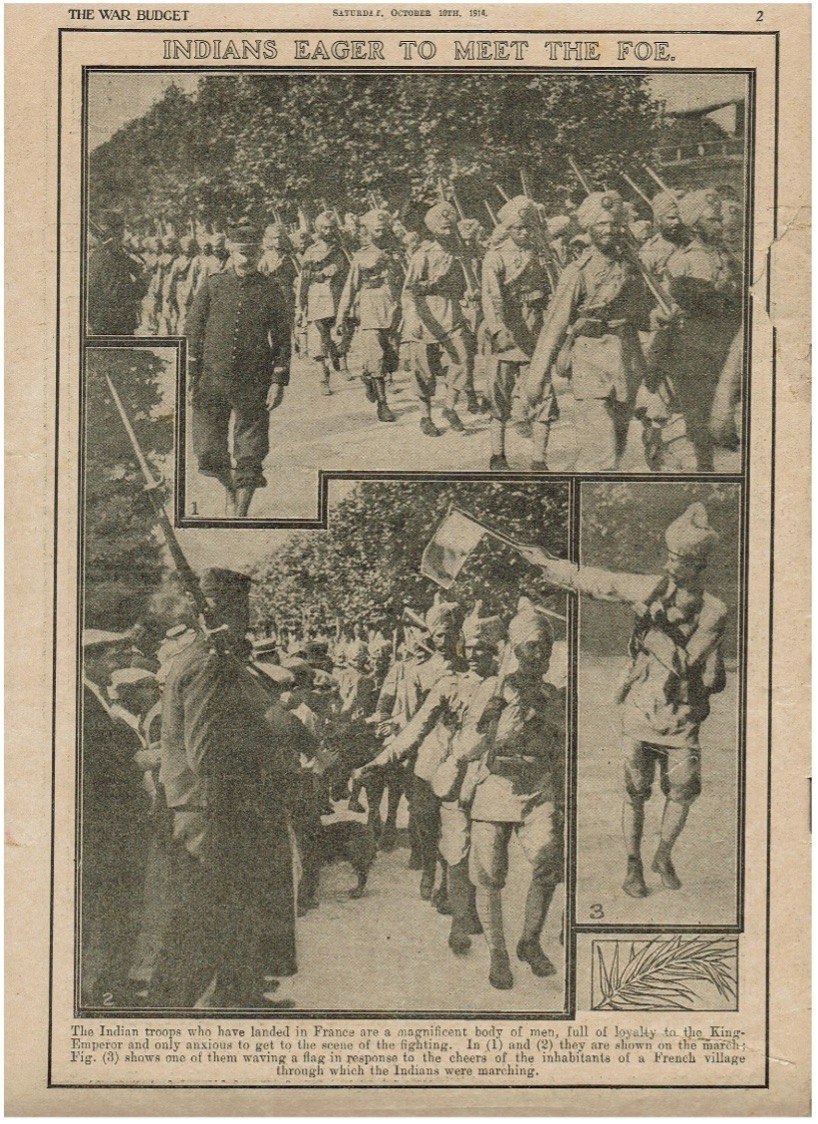