Hello, my name is Jonathan Brown and I am a voluntary researcher at Combined Military Services Museum in Maldon, Essex. I have a deep love for history, especially the military angle. I have recently completed a History BA degree at the University of Kent from 2018 to the summer of 2021. I am going on to do an MA course in archive and records management at the University of Aberystwyth to help me get introduced into the archiving cultural sector. I also enjoy writing, especially script-writing, and I have a strong passion for film. In the summer of 2016, I helped put together a short film about the Battle of the Somme at the National Archives, using original documents to construct my section of the film, which I wrote, filmed and narrated. The ultimate result, Somme Tales, can currently be viewed on YouTube. I have written several scripts of historical dramas based on real events.

Colonial troops: spoiling for a fight?

As a continuation to the previous blog post referring to the involvement of Indian colonial troops, my post focuses on the specifics of their first major engagement of the battle at Neuve Chappelle.

At 7:30 a.m. on 10 March 1915, the British began a thirty-five-minute artillery bombardment by ninety 18-pounder field guns of the Indian Corps and IV Corps, on the German wire which was destroyed within ten minutes. The artillery bombardment was followed by an infantry assault at 8:05 a.m. The Garhwal Brigade of the Meerut Division, Indian Corps attacked with all four battalions on a 600 yd (550 m) front, from Port Arthur to Pont Logy.

The attack confronted a part of the German defences that had not been bombarded by the artillery and before the mistake was realised, the two support companies followed suit. The Indian troops forced their way through the German wire and took 200 yd (180 m) of the German front trench, despite many casualties. The three Garhwal battalions swiftly overran the German infantry and pressed on to the German support trench. The leading companies then advanced beyond the Port Arthur, Neuve Chapelle road, without waiting for the planned thirty-minute artillery preparation and took the village by 9:00 a.m.

The British telephone system proved vulnerable to German artillery-fire and the movement of troops along communication trenches was delayed. The attack front was found to have been wide enough to overcome the small number of German reserves but the attackers had not been ordered to assist units which had been held up. British reinforcements were sent to renew failed attacks rather than reinforce success. Small numbers of German troops in strong-points and isolated trenches, had been able to maintain a volume of small-arms fire sufficient to stop the advance of far greater numbers of attackers.

4,200 Indian troops were killed within three days of this futile offensive, which was only launched because of this breakdown of communications and they attacked the wrong place. The postcard below shows some of the terrible destruction caused by the fighting at Neuve Chapelle. 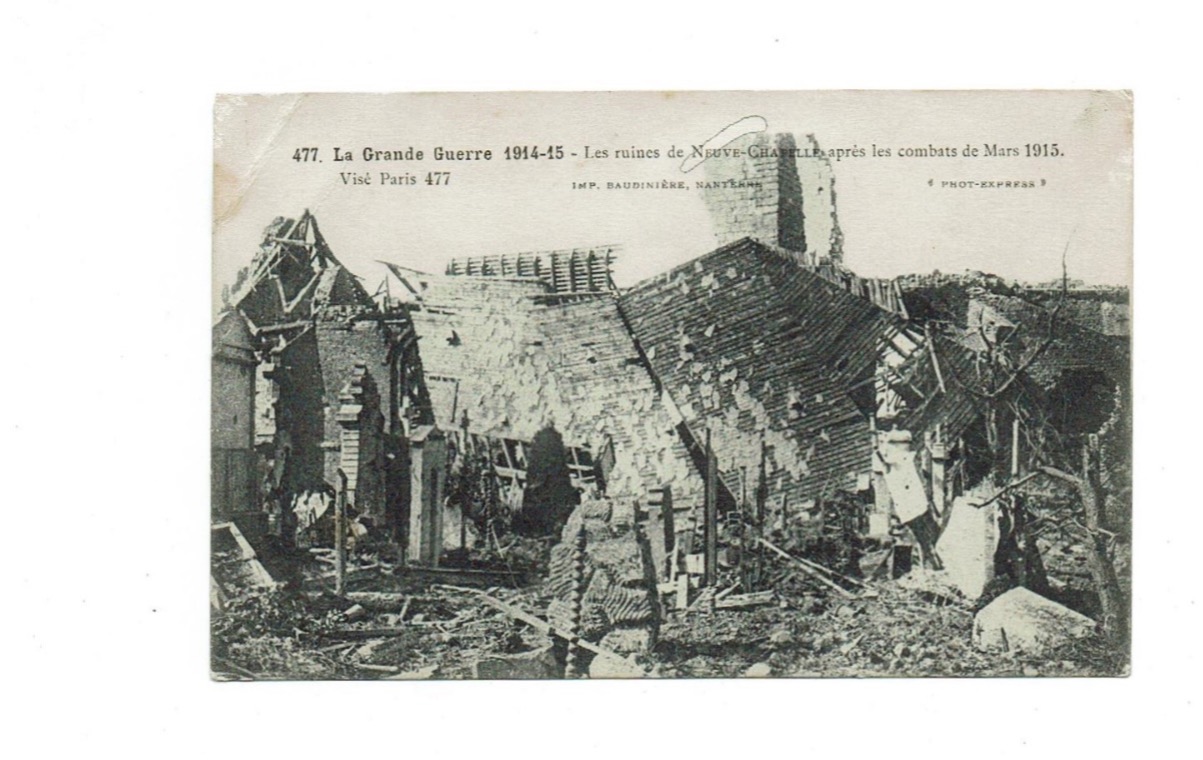 Contained within a number of War Budget volumes are pictures and comments on colonial soldiers on the allied side, recruited and taken to Europe and elsewhere to fight the Central Powers, specifically African soldiers from the Belgian Congo and French Algeria and Senegal and Indian troops recruited by the British Raj.

A running theme when it comes to the portrayal of all of these colonial recruits within the magazine, is that these soldiers of colour were fearless, even recklessly so, committed to fighting with their white counterparts and, above all else, they wanted to get to grips with the German enemy as soon as possible and drive the hated German invader from French and Belgian lands.

In short, they were spoiling for a fight, champing at the bit. A classic example of such an attitude is displayed, in which The War Budget issue for the 7th November 1914 describes the Indian troops as having “fought splendidly in France”. A drawn picture of charging Sikhs and Ghurkhas cements this image perfectly of fearless warriors charging into battle for death or glory. 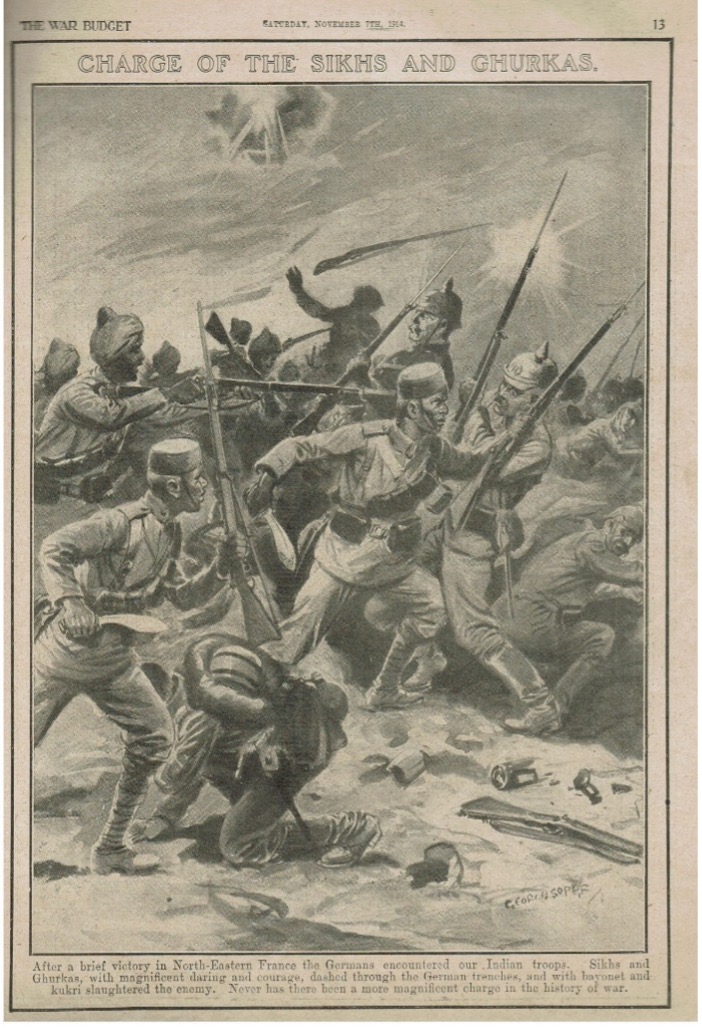 French and Belgian colonial soldiers are portrayed in a similar way. A September 1914 edition shows black soldiers from the Congo working in harmony with their fellow white soldiers, with all of their aggression directed towards the Germans. French colonial recruits are described in the same edition as having “reckless courage”. This attitude of portraying these men as very courageous, even recklessly so, and being disposed to violence, is an interesting and often overlooked area of the military histories of ethnic minorities during the First World War. 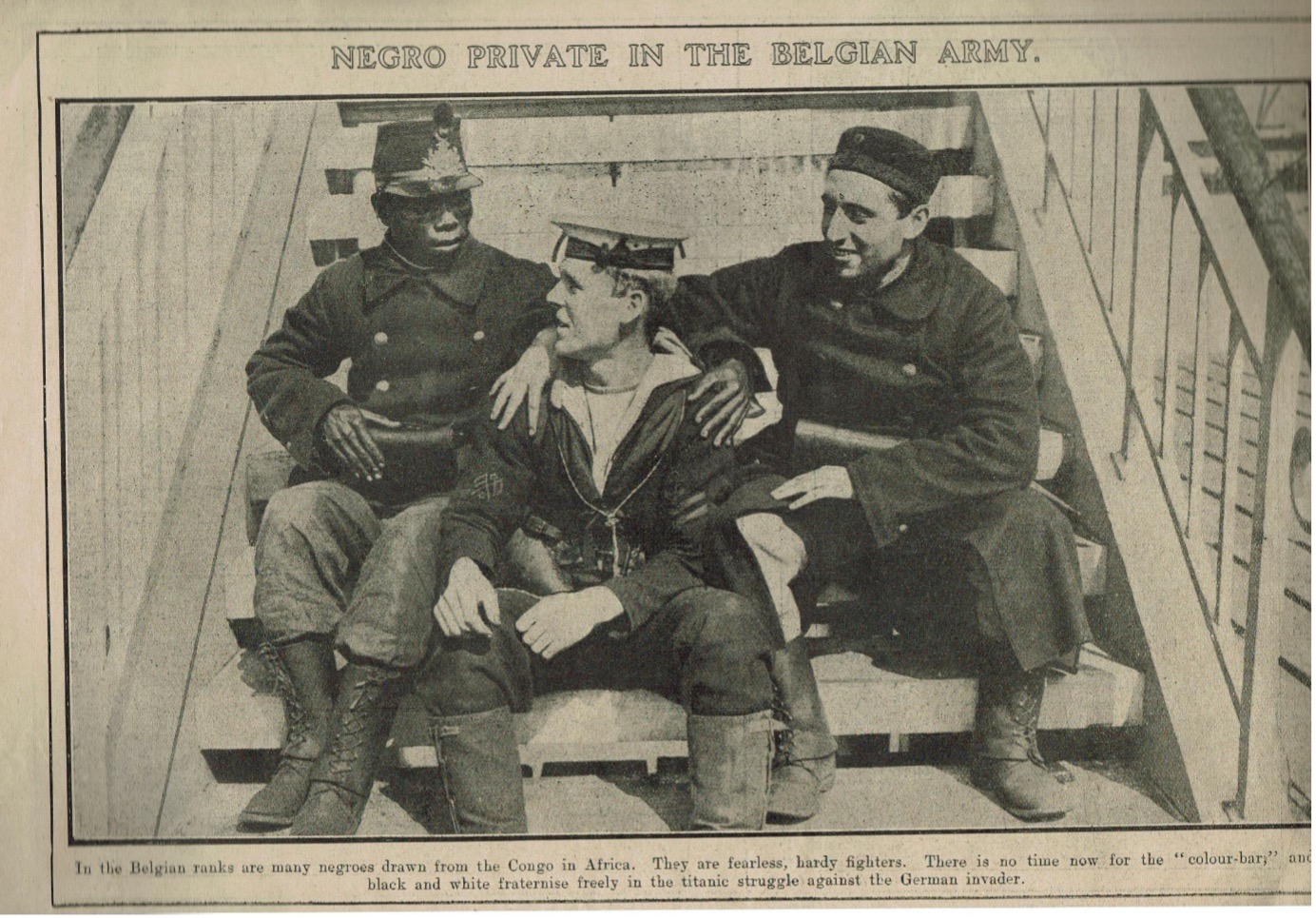 However, it is still made perfectly clear that these colonials are still inferior to their advanced white counterparts within this British propagandistic viewpoint. One picture (Image 4) portrays the cooking methods different soldiers employed in France and Belgium. Whilst British, and even German, units are portrayed as having large, sophisticated soup kitchens to feed their hungry boys, squashed into the corner of a page is an Indian soldier cooking traditionally from a small fire on the ground, thereby portraying colonial troops as still being primitive and behind whites in their methods. Therefore, imperialist racial superiority ideology is still certainly here, despite The War Budget praising colonial soldiers’ fighting spirit. 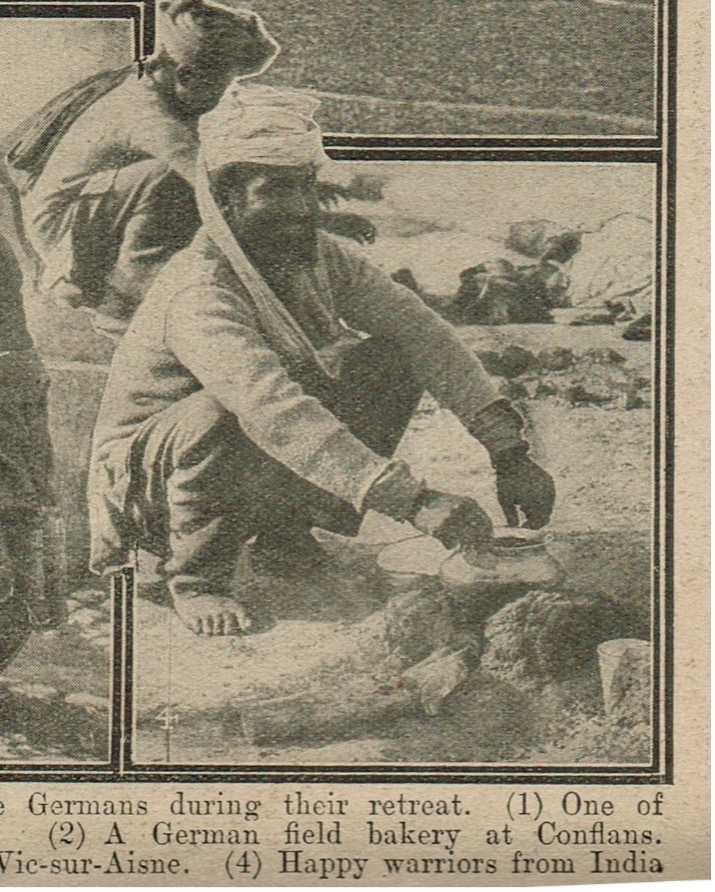 Indeed, in an October 1914 edition (displayed above), Indian soldiers are described as “happy warriors”. This stance was taken possibly to reassure people that colonial loyalty within the allied armies would never be in any doubt- their aggression was solely and completely focused towards the Germans.

With this being Black History Month, it is apt to bring these views, hidden away in history, forward as part of remembering these brave troops. They portray the views of certain people in Britain and whilst it certainly does not adequately convey the true complexities, experiences and motivations of these colonials, not least those who experienced the slaughter at Neuve Chappelle, it does lend valuable insight into the contemporary views held by their European imperialist leaders and therefore why they did what they did to these foreign soldiers during the Great War.